The extraordinary diplomatic career of the “little Elam girl” from Boston

“Diversifying Diplomacy, the memoir of Harriet Elam-Thomas, is more than just a personal history, more than just a ‘her-story.’ It is the timely narrative of an African American woman weaned in black Boston on family pride and ambition, liberated through education, inspired by civil rights battles, and mentored to the top by fellow travelers and battle-scarred elders. Hers is a great American story. It is fact, not fiction. It’s real.” 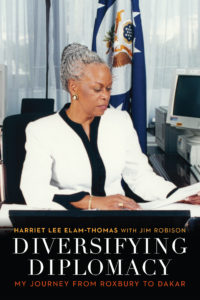 Today, diverse women of all hues represent this country overseas. Some have called this development the “Hillary Effect.” But well before our most recent female secretary of state there was Madeleine Albright, the first woman to serve in that capacity, and later Condoleezza Rice. Beginning at a more junior post in the Department of State in 1971, there was “the little Elam girl” from Boston.

Diversifying Diplomacy tells the story of Harriet Lee Elam-Thomas, a young black woman who beat the odds and challenged the status quo. Inspired by the strong women in her life, she followed in the footsteps of the few women who had gone before her in her effort to make the Foreign Service reflect the diverse faces of the United States. The youngest child of parents who left the segregated Old South to raise their family in Massachusetts, Elam- Thomas distinguished herself with a diplomatic career at a time when few colleagues looked like her.

Elam-Thomas’s memoir is a firsthand account of her decades-long career in the U.S. Department of State’s Foreign Service, recounting her experiences of making U.S. foreign policy, culture, and values understood abroad. Elam-Thomas served as a United States ambassador to Senegal (2000–2002) and retired with the rank of career minister after forty- two years as a diplomat. Diversifying Diplomacy presents the journey of this successful woman, who not only found herself confronted by some of the world’s heftier problems but also helped ensure that new shepherds of honesty and authenticity would follow in her international footsteps for generations to come.