July 1, 1999, President Bill Clinton sent the name Harriet Lee Elam-Thomas to the Senate as his nominee to be U.S. ambassador to the Republic of Senegal. 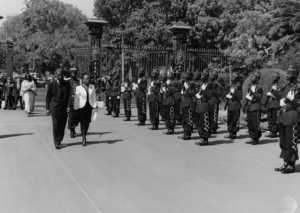 On her first journey to Senegal, she was just another face in the diplomatic crowd. Then she left that land—Senegal, home of the Maison d’Esclaves, the iconic slave house on Goree Island with its infamous “Door of No Return.” But she came back to Dakar, not just as part of the mission, but up front and personal: Her Excellency. Madam Ambassador. (The one with the salt ‘n’ pepper cornrows.) She was the messenger, and the message, as well—an embodiment of what the United States of America had come to be.

Diversifying Diplomacy, the memoir of Harriet Elam-Thomas, is more than just a personal history, more than just a her-story. It is the timely narrative of an African-American woman weaned in black Boston on family pride and ambition, liberated through education, inspired by civil rights battles and mentored to the top by fellow travelers and battle-scarred elders.

Hers is a great American story. It is fact, not fiction. It’s real. 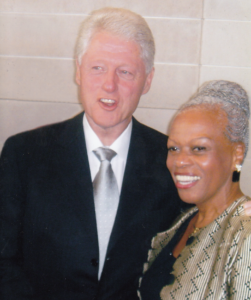 During Ambassador Elam-Thomas’ four-decade Foreign Service career, she demonstrated a remarkable dedication to the practice of bridging cultures. With unique vision and insight, Ambassador Elam-Thomas placed a human face on diplomacy. Her varied overseas assignments have taken her to Greece, Turkey, France, Belgium, Senegal, Mali and Cote d’Ivoire. Domestic assignments included counselor (the most senior career position) and acting deputy director of the U.S. Information Agency (now a part of the Department of State), as well as serving as foreign service personnel in Washington, the United Nations and the White House. Ambassador Elam-Thomas fulfilled her commitment to serve the national interest through public diplomacy during her overseas tours in France, Senegal, Mali, Cote d’Ivoire, Greece, Turkey and Belgium. She returned to Africa to serve as the U.S. ambassador to Senegal from January 2000 to December 2002.  Her performance abroad brought unprecedented recognition from the prime minister of Turkey and cultural leaders in Greece, as well as meritorious and superior honor awards from the Department of State.

The University has Pickering, Rangel, Truman and Boren Fellows as a direct result of the courses I teach and counsel I provide to students on this campus. The international focus of the Central Florida Region has also increased with The Orlando Economic Development Commission’s first International Trade Delegation to Montreal, Canada and with the region’s hosting delegations from Japan, India, Iraq and Afghanistan.   The Global Perspective’s Office of UCF has also hosted the former President of India, Ambassadors from India, delegations from Croatia and Northern Iraq (Kurdistan).

Advised senior U.S. military and civilian policy-makers about security and defense issues which obtained in their Area of Operation and led to the establishment of  the new Africa Command (AFRICOM).

investment, heightened Senegal’s credibility in the G-8 and through U.S. support of the New Plan for Economic Development (NEPAD).  Initiated path which led to Senegal’s receiving a coveted Millennium Challenge Grant.  Directed six U.S. Government agencies which operated in Senegal.